Gangaikonda Cholapuram, a name I read in history books in school kept my desire alive to visit it continued till I finally managed to make a trip here in July, 2018. As the history of the text books revolves round the Mughals, Guptas and Mouryas in India, the history of Cholas, Hoysalas and other South Indian empires are often overlooked and under celebrated.

Gangaikonda Cholapuram was the capital of Rajendra Chola situated near the Anicut  Dam over Kaveri. He built this city in memory of his triumph over the Gangetic Region for pursuit of holy water of the Ganga. We started from Kumbakonam bus terminus on a TNSTC bus for about 40 kms drive and arrived at Gangaikonda Cholapuram in an hour. Tajmahal is the most celebrated and visited Indian monument and termed as a Wonder. But hardly known to people apart from few enthusiasts , the Brihadeeswarar Temple at Gangaikonda Cholapuram deserves some attention. It is a monumental achievement of Indian architecture and an engineering marvel erected 1000 years ago standing tall with mesmerizing beauty and imposing dimensions. 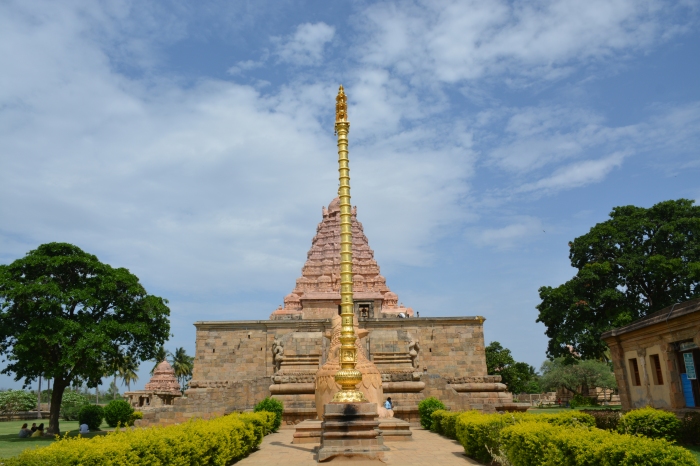 Nothing remains apart from the temple today. The temple is situated in a fortified premises along the highway. The enclosure was gated once upon a time. Only the ruins of a giant gopuram remains today. The base of the gopuram stands today and two giant gatekeeper deities(Dwarpalakas) are placed on both sides.Inside the premises there is qa customary tall golden Garuda Pillar and a giant Nandi statue facing the sanctum. 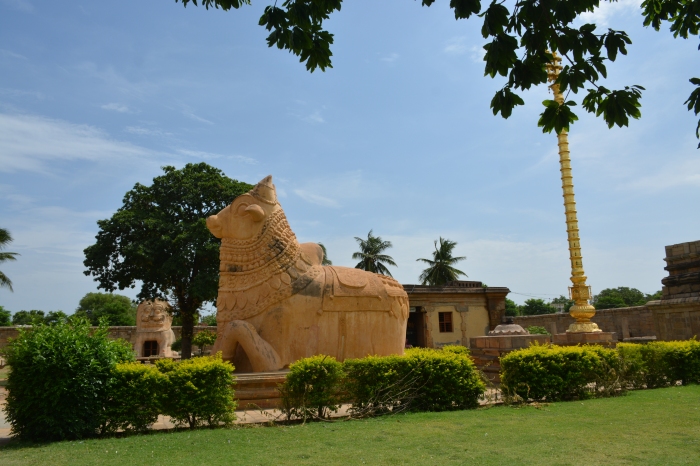 The way to the sanctum is through a large hall. The hall is significantly cooler than the rest of the complex as no light has ever entered in this 1000 years. It is only illuminated through electrical lighting. The Linga is a large one and the priest performs the ablutions with great devotion. There are giant doorways in right and left opening to the circumbulatory path that goes around the temple. The most imposing structure is the Vimana or the pinnacle of the temple souring high about ft. Emperor Rajendra Chola had initial plans to surpass the height of the Brihadeeswarar Temple in Tanjore built by his father Emperor Rajaraja Chola. But out of respect to his father he purposefully kept the height of the temple a bit lower than the one in Tanjore. But the curvature of the tower looks more alluring and beautiful than the earlier. The wall of the temple is adorned by various beautiful sculptures. Notable in these are the Lingodbhava Statue , The Nataraja Statue and the Ardhanariswar. There are also numerous sub shrines located around the main temple.

The great temple stands tall with all its majestic glory and grandeur away from limelight in a forgotten village of Tamilnadu.It deserves more celebration and promotion to potray the architectural excellence of ancient India to the modern World.

Nearest Railheads: Kumbakonam(KMU) or Aduturai(ADT) or Thanjavur(TJ). All of these are well connected from Chennai and Bangalore by train.

Roadheads:36 kms from Kumbakonam, 27 km from Aduturai,  73 km from Thanjavur. Numerous buses are available on this route.

Follow Tales of Trails on WordPress.com
Join 373 other followers