A train colored in blue and white appeared from the hazy table top hills and meandered through the base as I stand on a hilltop on a structure built two millennia ago amidst the plateau of Central India by the Great Mourya Emperor Ashoka.

A cool temperate February morning gracefully welcomed at the abode of peace,the Stupa of Sanchi.Starting from Bhopal, the capital of Madhya Pradesh,driving through the meadows rioting with yellow and green hills in the horizon,our vehicle crossed the Tropic of Cancer and soon reached at the base of the stupa amidst defining silence and peace.

The Stupa was built atop a hillock and survived the vagary of time and Islamic aggression.Pathways nicely decorated with flowers at both sides amidst pristine settings lead to the main stupa. 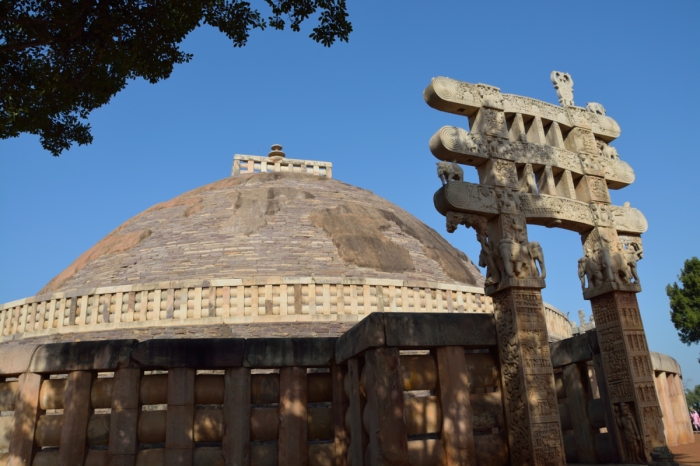 Several smaller stupas, smaller temples adorned the periphery of the central stupa.It was only 8:30 AM on Sunday, the monument was still free from crowd and the soft light on the stupa made to look it wonderful.

The intricate carvings on the famous Sanchi Gateways or Toranas are still witness of the finesse and excellence of Mouryan Art and Architecture. 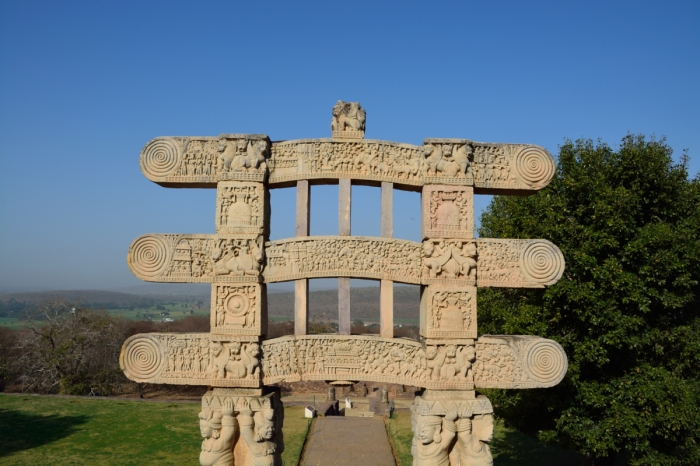 The smaller monuments, many of which were augmented later during Sunga and Gupta Dynasty’s rule offer splendid vantage points to see and freeze the moments.

Spiral stairs leads to the upper deck of the stupa and a parikrama or circumnavigation around the stupa offers beautiful view of the undulating hills rising in the horizon.

Frequently,trains comes out from the bends of the hills on this stretch of Mumbai to Delhi section of Central Railway and as it disappears into another bend the onlooker is transported again to the time of the reign of Ashoka the Great conquering the hearts of the millions with non-violence, love and welfare. 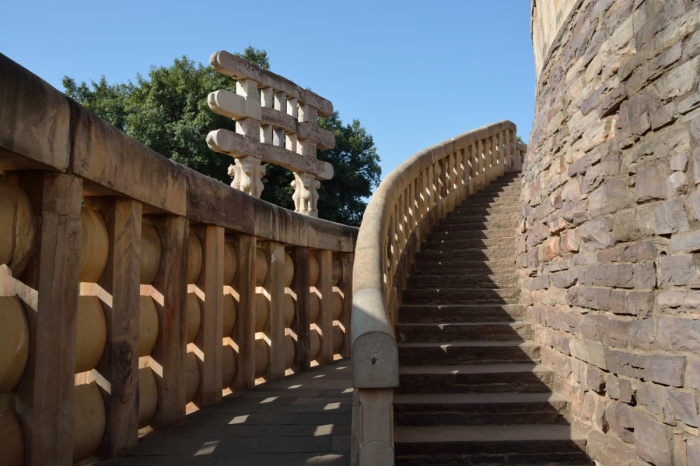 Sanchi is near to the town of Vidisha, where young prince Ashoka fell in love with Devi, an ordinary citizen, pushed to the race of the inheritance of the throne of Pataliputra and became the ruthless warlord ChandAshoka who massacred Kalinga and the bloodshed of the innocent caused by his own ruthless torture, turned him to DharmAshoka and the rest is history.

Sanchi proudly conveys the message of universal peace till date and the saga of a life of a Emperor who was the India’s first gift to mankind as an emissary of love, peace and tolerance in a World still torn apart by greed, violence and bloodshed of the innocent.